This morning I consumed a disappointing fried egg sandwich and had to re-evaluate my preferences towards egg based breakfast food stuffs. A heated debate ensued on twitter.
So after much deliberation, debate and a half hearted attempt to search the google box I decided there wasn’t a definitive Top 10 Eggy Breakfasts anywhere to be found, and that a productive way to fill my day would be to post one here. Also, it would prove to @grahamburglar that I had given the matter serious thought and wasn’t half heartedly throwing breakfast egg suggestions into the twitter machine.
Here goes…

The king of eggs in my eyes. A skill to master and can be served with anything. Favourites include; Toast (Obvz), Fishes – Salmon, Kippers, Mackerel etc. etc., and Corn Beef Hash, although you probably wouldn’t have that for breakfast but no-one would judge you if you did.


2. SCRAMBLED EGGS
Classics are the best, and they’re a piece of piss to make. My favourite hangover food, or basic meal when you’re brain cogs won’t work.
I say they’re easy to make, although a certain @reel_jen rang me for the recipe for Scrambled Eggs the other day. Me: “Seriously?” Reel_Jen: “Yeah so is it two parts milk to one part egg.”
#EGGLOL


3. EGGS FLORENTINE
I LOVE SPINACH. So any excuse to eat spinach at meal times is a good one. There’s some debate over which is better Eggs Florentine or Eggs Benedict. You’re probably a boy if you prefer Benedict. What with it having meat in it. (Trufax taken from Twitter poll).

No not the 1983 classic computer game. Although I’m pretty sure through out the 80s I will have often eaten a Chucky Egg whilst playing Chuckie Egg.
In case you didn’t know, a Chucky Egg is a boiled egg, mashed up in a cup with bread and butter and salt and pepper. Must be consumed with a tea spoon, super fast, as after about your third mouthful it’ll be cold already. Taste sensation and will make you feel like you’re 5 again.


6. SOFT BOILED EGG WITH SOLDIERS
Not much to say really. They’re a winner and fun to eat. 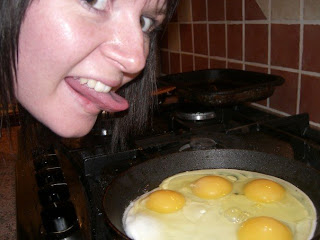 The biggest debate of all. I may have lost a friend over this as @sazwot is the biggest Fried Egg Sandwich fan of all time, and I’ve royally pissed her off putting it at number 7. I’ve just decided that there are far more superior egg based food stuffs for the morning than the humble fried egg. Redeeming factors – pretty quick to make and always needs fluffy white bread and real butter. Oh, and put a sausage in it and you can skip 3 more places to the top.


8. BAKED EGGS FLAMENCO
I had this at Lunya in Liverpool One. They describe it as “The prettiest breakfast ever. Two eggs, baked in a cazuela with a sofrito (tomato and onion) sauce seasonal vegetables, Serrano ham and chorizo”. It was pretty good, so it goes in the list.


9. EGGS BENEDICT
Ok, I like meat too. But not as much as Spinach. So Benedict comes in at number 9.


10. FULL ENGLISH WITH ALL THE EGGS
Technically, egg does not make up the base of a Full English, but this Breakfast staple couldn’t be missed off so I suggest you put all egg combinations on for a fuller eggy experience.