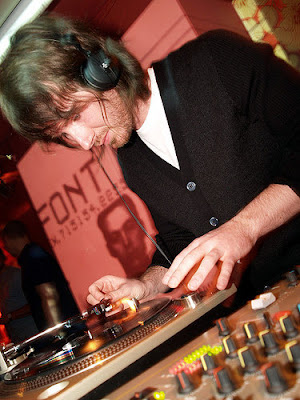 Here is the first in what I hope to be a succession of interviews with all the interesting and creative people I’ve met over the years since I moved to Manchester in 2007.

I’m pretty god damn excited about this one as kicking things off is one half of my very own current obsession – Emotional Pop. I was introduced to Simon aka Cosmic Baggy in about 2008 through Mark Webster, Cutloose Club and the Cosmic Disco site… but you can read more on them further down.

Baggy has generously provided me with EVERYTHING I ever wanted to know about himself and about getting deep down & emotional about pop music. You better get a brew because it’s a biggy… 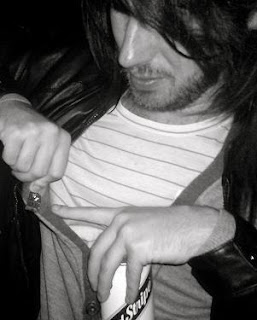 I’m responsible for the event planning and strategic delivery of all events held at Manchester Central Convention Complex (Formerly G-Mex & MICC) where we aim to exceed client and visitor expectation on over 200 events a year ranging from National & International Conferences to Public / Trade Exhibitions and Special Events ranging from Product Launches to Concerts which provide substantial economic impact to the city of Manchester through business tourism.

Pete is a close friend who has been a huge influence on me over the years. We met whilst I was working part time in Hervia/Vivienne Westwood whilst studying and Pete was working for Jigsaw Menswear where he used to play records in the shop on a Saturday afternoon and was a regular on the Manchester bar/club scene.

We used to hang out at The Boardwalk and The Hacienda and it was Pete who got me into DJ'ing when he once left me putting on records for three hours at one of his gigs whilst he 'popped out'. I'd never even used a mixer before this... Pete was into disco way before it was 'Nu' and played Rockabilly and Jump Blues years ahead of Andrew Weatherall and Cut Chemist brought it to the attention of the dance fraternity. With his hippie tendencies Pete has always leaned toward the counter-culture and this shows in his designs.

After leaving retail behind he decided to study furniture design, eventually becoming artist in residence at Manchester Metropolitan University whilst working on a number of his own ranges, building his portfolio.
After being nominated and winning a number of design awards Pete has also branched out into designing and installing shop-fits for a number of independent retailers including Oi Polloi, Tea Cup and Ruben Wood Hairdressing in Manchester's Northern Quarter, has worked as set designer on a number of TV adverts and music videos and has recently been employed as creative consultant at design agency Love.

I've also been fortunate enough over the years to 'acquire' a number of prototypes of Pete's furniture that now sit nicely within my home.

When I was employed at a company called Outgoing/Snowbombing we used to work from a converted coach house in Withington and shared office space with some guys who used to run a club night called SubTub. Ben is the brother of one of the promoters and this is how we met.

His whole family are either designers/creative consultants or are involved in the arts in some way. I remember one weekend many years ago witnessing what I thought was Ben and a group of friends tagging graffiti on one the Cornerhouse walls. As I approached him to ask him what he thought he was doing I eventually clicked that I'd walked into an organised event and not some random act of vandalism. The event in question was 'Doodlebug', where local artists were given the opportunity to showcase and exhibit their talents in a live, public environment.

Since these early days Ben has gone on to produce work commissioned by the likes of Adidas Originals and is currently working on a number of street art sculptures for a number of local authorities but what I like best about his work is it's pop sensibility and his hand drawn illustrations which remind me of the work of Keith Haring.


I met Alexis whilst working on the Cosmic Disco website and was aware of his work via the Tigersushi Soundsystem and the amazing 'Space Oddities' compilation albums he released on Permanent Vacation. In addition to being a very accomplished DJ and producer Alexis also runs the creative agency Monsieur L'Argent. You can find out much more about him via this interview I conducted with him back in 2009.

Apiento runs what is probably the best music/culture/design/lifestyle blog on the internet at the minute - Test Pressing. When not publishing invaluable information on his blog, Apiento also runs Village Green which has designed some stunning label covers recently for the re-issue label - Emotional Rescue / Emotional Response. These bloody creative types. They are good at everything aren't they?


Oh man, if I ever won the lottery… Style and elegance in it's most simplistic form. With clean lines and clothes that use only the highest quality materials possible I find Hermes to be understated, just like myself... ;-)


I came across New Look whilst browsing the weekly Piccadilly Records mailing list sometime late in 2011 and the sound clips stood out instantly from the hundreds of mainly mundane new releases. As a result we rated it as one of the albums of the year in our 2011 'Emotional Pop' end of year review. With abstract storytelling over analogue synth pads this is futuristic electronic pop at it's finest. What Janet Jackson would sound like in 2050 if they ever recreated her as an android...


Vidal Benjamin is a French DJ, (he wouldn't consider himself a working DJ) who through the power of the internet has become known to a number of people around the world via his unique mix-tapes, instantly recognisable by the selection of obscure european and japanese pop he favours and blends into a frenzied concoction unlikely to be heard anywhere else. I can only recommend doing a web search for him and check out some his mixes with an open mind and if you fancy digging out some of his selections, an open wallet. For a little more on Vidal, check out this interview we did with him last year...


Their raison-detre is to bring some of the best underground DJ's to Manchester who may have never played the city prior to their guest slot at Cutloose. The guys who promote the night have a great love for music and sharing this with the people who attend their parties shows. Their home at the Roadhouse suits them perfectly, in a basement under the streets where you can get comfortable inside bass bins and dance in disco heaven. They have been known to even let me get on the mic and toast the crowd. Great vibes and music, highly recommended.


A new festival from the guys behind Snowbombing, Festival No.6 has the fantastic location of Portmeirion as it's backdrop and looks like it's going to be a true boutique affair with unique accommodation and intimate venue's hosting the likes of New Order, Primal Scream and Spiritualised playing live alongside the likes of Francois K, Andrew Weatherall and Daniele Baldelli (to name a few) on DJ duty. Not only do the surroundings and music look top notch but there are also lectures, installations and film screenings with leading authors, artists and film makers to keep the grey matter stimulated. All in all it sounds like a mature festival making a nice alternative from what is otherwise becoming a saturated and mainstream market.


AFTER HOURS:
What are you working on right now?

* Deep breath * [Disclaimer – put the kettle on…] Other than my day job I run a music based blog with good friend Neil Hill (aka Niles) entitled ‘Emotional Pop’, simply so we could keep our toes in the musical waters as our professional careers began to demand more of our time than our social activities. The blog has two simple criteria regards the tracks we post. Upon listening does the music a). Make you want to sob uncontrollably? b) Make you want to take your top off? a + b = c) The holy grail.

Emo-Pop is the result of a friendship that started over 8 years ago through the Electriks (Electric Chair) forum (remember those?) where we shared a love for all things ‘Boogie’ where it transpired we shared a favourite track (Katie Kissoon – You’re The One (You’re my number one), after which I knew we would be friends for a long time to come. Through a friend of Neil (Mark Webster aka Bucky) we were handed a slot on a local pirate radio show ‘Unity Radio’ where every Monday from 2200-0000hrs myself, Neil & Mark would broadcast to literally 10’s of people. What started as a straight up mix show developed into a more structured radio format. The show was called ‘Makin’ Music’ and hit the airwaves every week for over two years, the irony being we had to break into a pirate radio studio most weeks in order to broadcast.

Shortly after starting the show the three of us starting working together on  an electronic music based website called Cosmic Disco. Being in the right place at the right time (2006 onwards…), playing the right kind of music we hit on the Zeitgeist for what was to be considered a ‘Cosmic’ revival within the ‘Underground’. The website went on to host mixes from some of the best DJ’s from the scene also featuring interviews / reviews & previews. The website then developed into an irregular club-night where we gave UK debut’s to a number of European artists/bands/DJ’s including POLLYester / DJ Mooner / Mark Seven / Beppe Loda & Felix Dickinson to name a few. As a result of various exposure within national press and word of mouth around the net we were also asked to provide music for The Guardian @ Glastonbury and curate events for Futuresonic Festival as well as holding weekly DJ residencies in and around Manchester as well as guest slots up and down the country and had a great time doing so.

After almost 6 years running what was considered to be one of the leading music blogs of it’s kind, myself and Niles decided to call it a day due to ever increasing work loads where Mark continues to fly the flag with Cosmic Disco, of which he still does to this very day.

When we managed to find some time to ourselves after leaving Cosmic Disco myself and Niles setup the ‘Makin Music’ blog as a solo project for 18 months, recording monthly podcasts of the radio show format, broadcasting online. Some of the phone-ins and content were ridiculously childish but great fun mixed with old and new music we just dug.

After ‘Makin Music’ we found that whenever we DJ’d or talked about music we found ourselves focusing on those tracks that would be played towards the end of the night when you could slow things down and play those long forgotten but instantly recognizable tracks – Any genre, where you could get away with (almost) anything. That point at the party where you could bring out the emotional pop…

During one particularly mind numbing bar / restaurant gig we were handed a microphone to announce last orders. Instead of notifying the customers it was time to get themselves a final drink before heading home I was so overwhelmed by the track that Niles was playing at the time (The Creatures – Inspiration, which just so happens to be the first ever track posted on Emo-Pop…) I felt an uncontrollable desire to express myself vocally over the lyrics. Emotional pop was born out of tracks like this. Think the ‘Reggamental’ mix of Shabba Ranks ‘Mr. Loverman’ or Michael Jacksons ‘Liberian Girl’. I’m welling up just at the thought…

As the tagline on the blog states: ‘Emotional Pop – A Tops Off Music Blog’. It’s that simple.

I highly recommend stripping to one’s waist in a primal display of emotion whilst listening to the selections found on the blog. I find it very theraputic after a hard day’s graft…
Posted by Unknown at 22:57