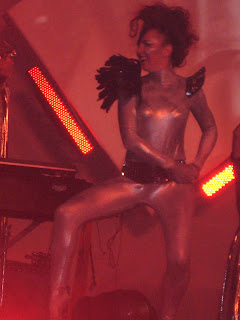 Fun and games at the Big Chill this year consisted of a group of 16 of us... like herding (disco) cats some might say but amazing times were had by all. General consensus from the weekend as follows...

Favourite Fashion
Oversized asymmetric shoulder pads sported by Marina of Marina and the Diamonds, and the super synchronized dancers from Chrome Hoof, seen above. Think I’ll be fashioning myself one out of sequins, feathers and maybe a curtain tassel or two.

Horse Meat Disco – The album is purchased and winging its way to me from a popular media e-tailer as we speak.

Totally Enormous Extinct Dinosaurs – Gus from Synthia and me checked these guys out because their dad used to be his choir master?? Anyone who can DJ dirty synth disco with a silver sequined cardboard box on their head... is my hero. I’ll be forever in awe of the love they put into that set and the shapes they pulled.

Chrome Hoof – Coupled with the silver clad gyrating asymmetric shoulder pads as seen above... we reeled in amazement at the doom metal, disco, acid house sounds... How many members on stage, room for one more?? Did we love it? Yes, yes we did.

Other musical highlights... Lindstrøm (of course)// Greg Wilson (so many classics, so little time)// Todd Terje (sporting a beard and not a tache, lovely all the same)// Metro Area// Creepy afro jazz from The Ex, Getatchew Mekurya and guests// DJ Sandrinho (ch ch ch check this guy out!)


Worst Entertainment
Noel Fielding and everything he did. The man should not be allowed to do improvised comedy and should be forced to stick to what he’s best at – scripted scripted scripted television with his moustachioed side kick.
Posted by Unknown at 19:45